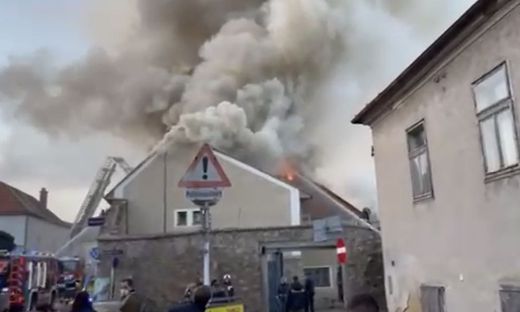 Police inspection is no longer available after a major fire. Important items such as weapons and ammunition could still be saved.

A fire in the center of Perchtoldsdorf (Mödling district, Lower Austria) also affected the police inspection on Monday. The office is temporarily unavailable. The officials are moving to Brunn am Gebirge for the time being, they said State Police Directorate Lower Austria on Tuesday with. The search for replacement accommodation is ongoing.

Three fire brigades with 90 men were on duty, reported Franz Resperger from the Lower Austria regional command. The fire is likely to have started in a currently closed hotel, said the spokesman. The flames seized the roof structure and spilled over to those of the police station. Both roofs were ultimately in full fire. The fire brigades proceeded with massive external and internal attacks.

According to the spokesman, the police station tried “to save what can be saved”. The executive described the damage caused by the fire as enormous. A column of smoke was visible from afar, witnesses told the APA.

Weapons and ammunition were brought to safety in good time before the fire broke out, as were files, for examplesaid police spokesman Heinz Holub. Officials discovered the fire in the adjacent property around 4.30 p.m. “Fire out” was the order of the day at 7.40 p.m. According to Holub, the investigations to clarify the cause of the fire will be carried out by the State and Federal Criminal Police Office from (today) Tuesday. Replacement quarters are being sought together with the community.