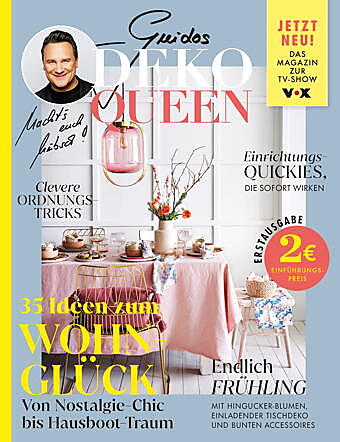 Hamburg (ots) – “Living comes from feeling good”, is how successful designer and living expert Guido Maria Kretschmer sums up his understanding of a beautiful home. His passion for living, furnishing and decorating is the subject of the new living and lifestyle magazine GUIDOS DEKO QUEEN from Gruner + Jahr and the broadcast of the same name on VOX. The publishing house and the TV broadcaster developed the new concept in cooperation; they both belong to the Bertelsmann Group. The magazine and the TV show will premiere in March. The magazine will hit the newsagents on March 18th. On television, Guido Maria Kretschmer will choose Germany’s Deko Queens every Saturday at 5 p.m. from March 20th.

GUIDOS DEKO QUEEN is a new type of living and lifestyle magazine, which, under the direction of Christina Gath as editor-in-chief, deals not only with classic living topics but also with beauty, lifestyle, hospitality and sustainable living. The booklet sees itself as a source of advice and inspiration for all decoration enthusiasts who are interested in easy-to-implement furnishing and makeover ideas. With the Guido-typical wink and his positive view of the world, it shows in an entertaining way that even small changes can make a big difference and that something beautiful can really be made out of every living situation. In addition to home stories, interviews and before-and-after stories, the magazine also takes an exclusive look behind the scenes of the TV show, in which two candidates work, screw, paint and decorate on a given motto.

As Editor-At-Large, Guido Maria Kretschmer brings his personal “living wisdom” into the magazine and advises the readers in his inimitable humorous and warm-hearted way. “Living well is the logical consequence of being well dressed. Furnishing is a important part of my own life “, says the designer about his great passion for living. “A lot can be achieved with small changes. Our home is a place of well-being that, like our life, is constantly changing – sometimes on a large scale, sometimes on a small scale,” says Guido Maria Kretschmer.

Christina Gath, editor-in-chief of GUIDOS DEKO QUEEN: “With the new magazine we are addressing everyone who enjoys redecorating, redesigning and redesigning – the deco queens. They are not defined by their age, but by their creativity, their love of design and their passion for shopping. And we share with you and Guido the certainty that a beautiful home makes you happy – especially in these challenging times. “

Matthias Frei, Publisher “Living”: “GUIDOS DEKO QUEEN is a unique concept because the TV format and the magazine were created at the same time. GUIDOS DEKO QUEEN is an example of the successful cooperation between the companies VOX and Gruner + Jahr, both of which are involved of the Bertelsmann Content Alliance. With the magazine we are opening up a very shopping-affine target group and are expanding our portfolio and thus our market leadership in the living segment. “

Alongside the successful women’s magazine GUIDO, GUIDOS DEKO QUEEN is the second magazine by and with Guido Maria Kretschmer from the Gruner + Jahr publishing house. The designer is the first prominent personality with two magazines in retail and a pioneer in the personality magazine segment.

The regular copy price of GUIDOS DEKO QUEEN is 3.50 euros, the first edition on March 18 is available at the introductory price of 2.00 euros. The print run is 140,000 copies. The second issue will appear on April 22nd, the title is planned to be issued ten times a year.

An interview with Guido Maria Kretschmer, the cover and view pages of the first edition as well as press photos are available for download: HERE