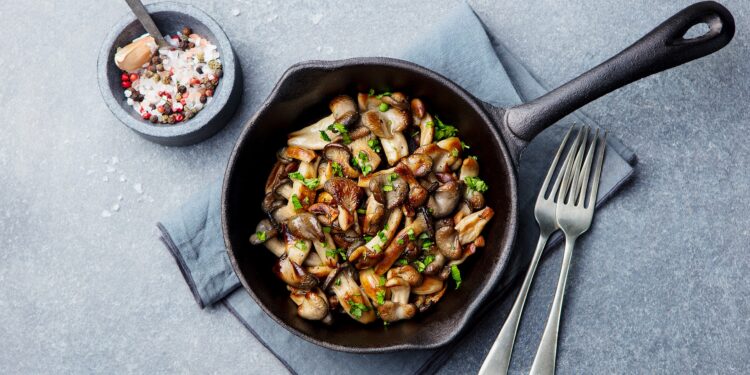 That’s why we should eat more mushrooms

Eating mushrooms makes it easy to add important micronutrients to your diet without consuming more calories, sodium, or fat.

When you add mushrooms to your diet, you absorb numerous micronutrients, including nutrients that many people lack, according to research conducted by experts from NutriScience LLC and Nutrition Impact. The results of the research work were published in the English-language journal “Food Science & Nutrition”.

Benefits of small amounts of mushrooms?

Wouldn’t it be nice if you could add vital nutrients to your diet without consuming extra calories, sodium, or fat? According to the research group, this could be achieved with a relatively small amount of mushrooms. Using data from the National Health and Nutrition Examination Survey (NHANES) 2011-2016, the research team investigated how supplementing with one serving of mushrooms per day affects the nutritional profiles of the participants. They analyzed three different scenarios.

Which types of fungi were examined?

In one scenario, white mushrooms, crimini, and portabella mushrooms were added to the diet in a 1: 1: 1 ratio. In another scenario, mushrooms that were specially irradiated with UV light (higher vitamin D content) were tested. In the third scenario analyzed, oyster mushrooms were used. The effects were determined for people aged nine to 18 years as well as for people over the age of 19.

Adding a daily serving of mushrooms (84 grams) increased several so-called deficient nutrients, including potassium and fiber. This applied to the mixture of white mushrooms, crimini and portabella mushrooms in a ratio of 1: 1: 1 as well as to the oyster mushrooms, the researchers report.

Other benefits of eating mushrooms

If people frequently consume mushrooms that have been irradiated with UV light so that they contain more vitamin D per serving, the vitamin D intake could reach the recommended daily value for the group of 9 to 18 year olds as well as those over 19. Reach and even slightly exceed year-olds (98 to 104 percent). This would help to reduce the shortage of this deficient nutrient in the population, explains the team.

The research confirms that adding mushrooms to the diet is an effective way to meet the nutritional goals identified by the DGA (Dietary Guidelines for Americans), explains Mary Jo Feeney of the Mushroom Council in a press release.

Mushrooms are no longer just a side dish

According to the experts, mushrooms have a unique nutrient profile that provides nutrients that are found in both plant-based and animal-based foods. Today, mushrooms are therefore increasingly used not only as a side dish, but also as a main course in a plant-based diet.

The mushrooms support efforts to lower the intake of calories, saturated fat and sodium while increasing the intake of under-consumed nutrients such as fiber, potassium and vitamin D, the researchers explain.

What does mushrooms contain?

The researchers explain that adding a portion of mushrooms and oyster mushrooms to the NHANES diet for 2011-2016 would probably add 2.24 or 24.0 mg of ergothioneine and 3.53 or 12.3 mg of glutathione based on published literature values.