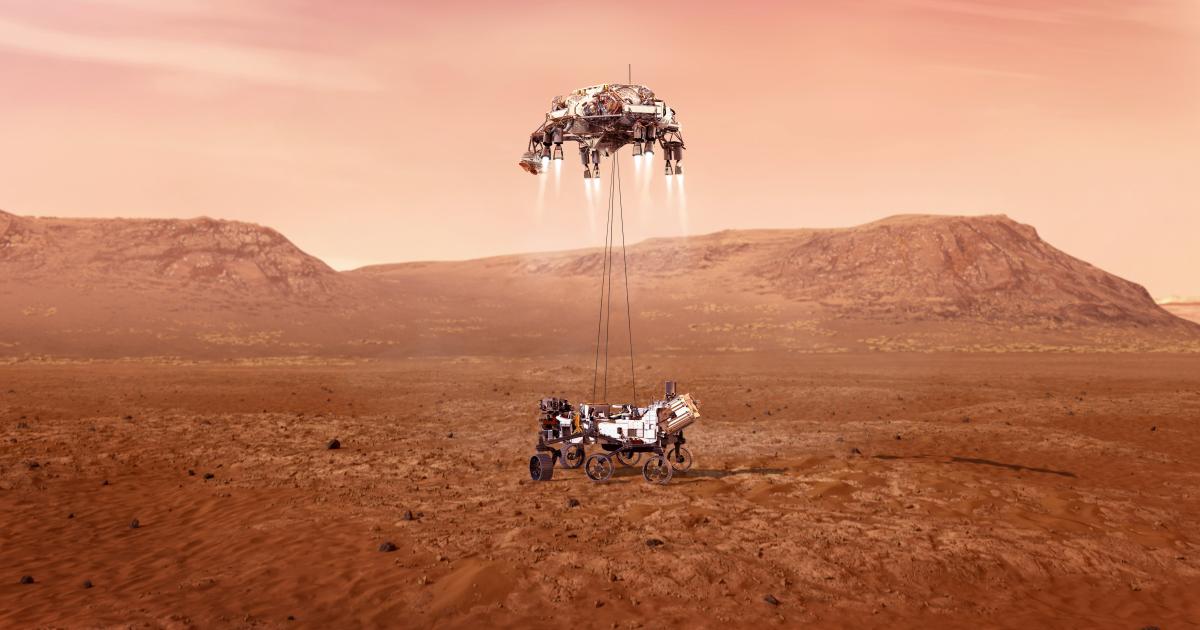 NASA’s Mars rover “Perseverance” was in space for over 200 days. He is the great hope for scientists all over the world to search for clues of life on the Red Planet. Today he will reach Mars and start his dangerous landing approach.

For NASA scientists and engineers, this is known as the “7 Minutes of Terror”. That’s how long the landing maneuver takes, during which the 1,025 kilogram rover is braked from 20,000 km / h to 0.

Since Mars is 203.3 million kilometers from Earth, the radio signal needs a correspondingly long time: you will find out with a delay of about 11 minutes whether this maneuver has been successful. Because of this delay, the landing cannot be controlled “live” and is therefore completely autonomous, planned to the second.

When entering the atmosphere of Mars, the rover’s landing capsule is braked to 1,600 km / h. With the help of small rocket engines, the spaceship has to constantly correct its course independently. Otherwise, air holes could rock it and throw it off course. A parachute measuring 21.5 meters then opens at a height of 9 to 13 kilometers. This is not enough for a soft landing, it can only slow Perseverance down to 320 km / h.

20 seconds after the parachute has opened, the thermal shield that protected the rover from the hot atmosphere is repelled. Then, for the first time in the history of space travel, a camera will record images of the approach to Mars.

The cameras also have a technical function: They help the rover to find out exactly where it is. So he can identify his exact landing site. This is compared with a map stored on the rover’s system. Scientists have noted on it which places are suitable for a safe landing. Perseverance can then steer towards it.

For this purpose, 8 small engines are used from a height of 2,100 meters, which work like a jetpack. They are directed towards the ground, continue to brake the rover and navigate it to the selected landing site. The parachute is dropped and the rover evades it so as not to get tangled.

Once the rover has landed successfully in the landing region, the Jerzero crater, it starts its great search. Its cameras can document the environment in particularly high resolution (see below). He will also take soil samples at suitable locations. The area is a water-formed delta with many mineral deposits.

The great hope is that Perseverance will find fossils and thus traces of life there. An improved drill ensures that stones are only broken open and not pulverized, as is the case with the Mars rover “Curiosity”, which has been researching Mars since 2012.

We will accompany the landing with a live ticker and live stream from 8:15 pm today.