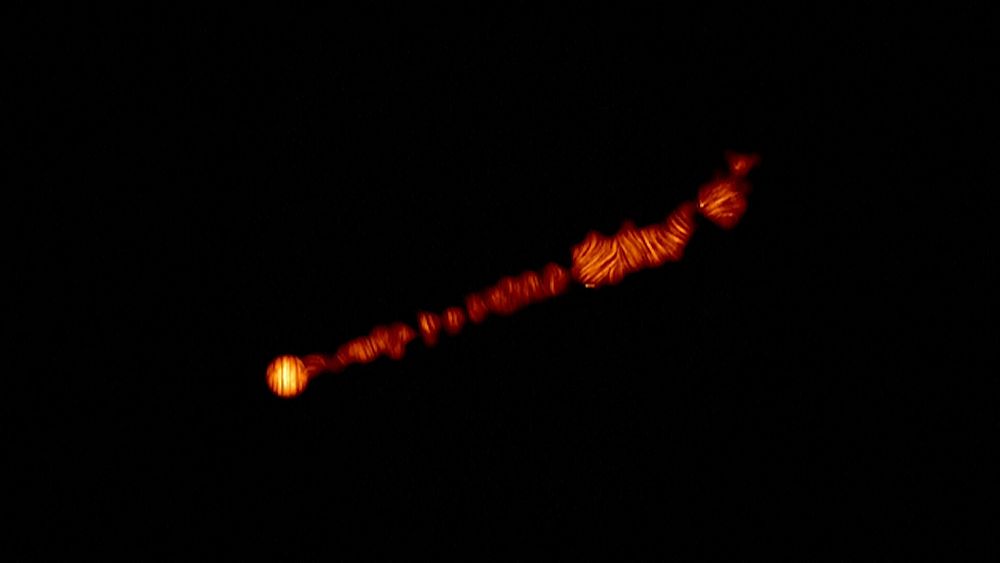 It is another milestone in space research: For the first time, scientists have detected magnetic fields near a black hole and made them visible.

It is the same black hole in the Messier 87 (M87) galaxy, the image of which was published around two years ago. The data comes from the Event Horizon Telescope (EHT), for which various radio telescopes around the world were interconnected.

Now the EHT observations show the first image of the magnetic field distribution in the bright ring around the so-called shadow of the black hole in the center of M87.

Sara Issaoun, astronomer at Radboud University in Nijmegen and member of the EHT explains why these fields can be seen: “The polarized lights have a beautiful, somehow ordered structure. This means that the magnetic fields are ordered and thus they can push gas out. The gas is then free to move and you get a greater pressure near the black hole – and then it just flings the gas out.“

Scientists at the Max Planck Institute for Radio Astronomy in Bonn announced that this would help to better understand how the luminous structures in the vicinity of a black hole are created.

It was important to observe that the radio radiation is polarized, i.e. has a non-random direction of oscillation. Polarized radiation is considered by astrophysicists to be a reliable indicator of the presence of magnetic fields.

Magnetic fields, in turn, play a crucial role in the formation of so-called jets. The reason for this is that black holes absorb large amounts of matter. However, some of this matter does not fall into the black hole, but is shot out into space as super-hot plasma. «

In black holes, the mass of a few to several billion suns is compressed into an extremely small region. Due to the immense gravity, not even light can escape from the direct environment, hence the name. Black holes can arise, for example, when burnt-out giant stars collapse under their own weight. The exact origin of supermassive holes like in M87 has not yet been clarified.