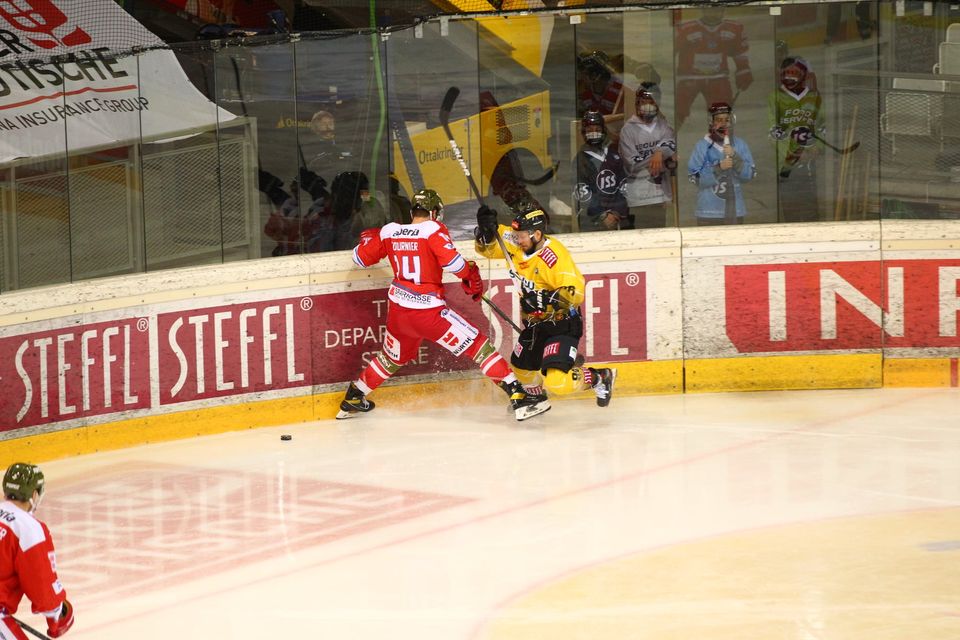 Vienna / Bozen – A goal by Dennis Robertson decided a hard-fought match between spusu Vienna Capitals and HCB Südtirol Alperia in the Erste Bank Arena in Vienna. The Foxes prevailed 4-3 in extra time with a wonderful goal from the Canadian defender after the home side equalized in the last minute of regular time. In the table, the White Reds are at the top with 9 points and have 5 points ahead of their pursuers Fehervar, who however played one game less. Bernard & Co. will not be in action again until next Sunday, February 21st, in the Klagenfurt town hall against the EC KAC (5.30 p.m. with direct broadcast on Video33), as they are free of play on Friday.

The match. Even today, coach Greg Ireland was able to draw on the full and therefore sent the surplus Pietroniro and Pitschieler to the stands. Strong start third of the Foxes, who surprisingly fell behind after six minutes due to a Bauer Onetimer, Irving did not make the safest impression, but then overtook the home side within four minutes. Two minutes after the Caps opening goal, Alberga made a Miceli close unsustainable, while Findlay rebounded after a Robertson blueliner, giving the White Reds the lead. The Bozner were close to the third goal through Giliati, Starkbaum stopped the broken Italian-Canadian. Despite a shot ratio of 13 to 4 in favor of the HCB, Vienna scored an equalizer with an on timer from Bauer one second before the first whistle at the break, the pass came from Vause.

Goalless second section, although both teams found several good chances, at the beginning Leduc and Nissner for Vienna, Bardaro and Giliati for Bolzano. After five minutes, Plastino cut the disc at the very last moment with a Save Loney. Towards the middle of the third, thanks to two bank fines against Youds and Roberston, the Capitals had a great chance of taking the lead for four minutes, the Weißroten put down an excellent penalty killing and did not let anything burn. In the final minutes, the home side made a lot of steam and Irving had to unpack all his skills against Loney and Leduc, on the other side the duo Findlay-Gazley failed.

The final section was not for the faint of heart, the match got a bit tougher and the checks were brought to an end. Vienna was very close to a goal through Nissner and especially in a hidden shot by Wukovits, which Irving blocked with a big save. A power play by the Foxes had just ended without success when Halmo put the Foxes in the lead again: with a lot of physical effort he got Wall’s disc, failed first on Starkbaum and used the rebound. Coach Cameron timed out three minutes before the end of the game and brought in the sixth field player early on. Bolzano was unlucky, because at first Halmo only hit the goal post and in return the home side made up a little happily with Loney.

To make matters worse, Gazley picked up a two-minute penalty, the Foxes held their opponents in check and thanked Irving, who was the winner at the beginning of extra time against Wall and Vause. After being outnumbered, the Weißroten attacked and Robertson scored the winning goal with a violent shot that was worth seeing and secured his team the additional point.