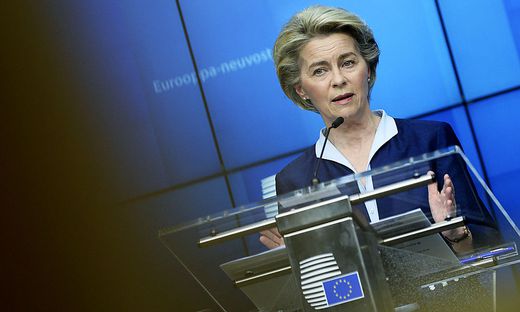 The heads of state and government of the EU countries discussed the Vaccine distribution. The details should now be provided by the EU ambassadors be clarified. A solution is to be found on the basis of the population share of the EU countries and the delivery speed in the distribution of ten million additional doses from Biontech and Pfizer, it said on Thursday in council circles.

Before the start of the virtual EU summit on Thursday, Federal Chancellor Sebastian Kurz (ÖVP) emphasized that The main topic of the heads of state and government will be the fight against pandemics. “If vaccine distribution is not to be an issue for a summit, what then?” Declared the Chancellor. It is also completely incomprehensible that the EU exports 70 million doses of corona vaccines to all parts of the world, but does not itself receive any vaccines from outside the EU.

“That is a massive disparity,” said Kurz. He therefore supported Commission President Ursula von der Leyen in her goal of counteracting this and advocating export controls. At the summit itself, however, after heated debates, there was a compromise proposal on vaccine distribution, which was also included in the conclusions: Now the EU ambassadors are supposed to resolve the conflict and not the steering committee, whose co-chair Clemens Martin Auer had to withdraw because of the cause. The EU ambassadors are bound by instructions to their capitals and should decide unanimously.

When fighting the pandemic, the motto “cost what it wants” must apply, emphasized Kurz. The discussion that there is a financial restriction of 200 million euros for the procurement of vaccines in Austria is therefore “absurd”. So far, 80 million euros have been spent and 30 million cans ordered, the problem lies in the delay in deliveries, said Kurz.

77 million cans exported from the EU

EU Council President Charles Michel wanted to avoid a dispute about the redistribution of corona vaccines in the EU at the EU summit, which was called for by Austria and other countries. A group of experts therefore tried to resolve the dispute on Wednesday evening and Thursday morning – apparently in vain.

Of the almost 450 million EU citizens, 62 million have now been vaccinated against Corona at least once. 18.2 million people also received their second dose. The figures presented the EU Commission chief Ursula von der Leyen on Thursday at the EU summit. The EU countries have received around 88 million vaccine doses from the pharmaceutical companies. At the same time, 77 million cans have been exported from the EU since December 1st.

Dense agenda at the summit

The regular spring summit of the EU has a tight agenda today and tomorrow. Much more than the individual points of contention, however, it is about determining the position and the question of common perspectives. According to reports, Council President Charles Michel wants to avoid petty dispute (about individual vaccine deliveries) at the highest-ranking meeting. But there are many points to be clarified.

The EU’s vaccination campaign against the coronavirus is only slowly gaining momentum. At the video summit today, the EU heads of state and government are again discussing ways of accelerating this. However, the wishes of the 27 Member States do not always go in the same direction. An overview:

Due to major delivery delays, the EU has been in a clinch with the British-Swedish manufacturer AstraZeneca since January. In the episode wrote Brussels stipulate that manufacturers have to obtain authorization for exports. Since then, only one out of hundreds of deliveries has not been allowed. However, it is now clear that a large part of the corona vaccines produced in the EU are exported. The largest customer is Great Britain. But next to nothing comes back from there.

On Wednesday, the commission therefore decided to significantly tighten export controls. Export bans are now also possible if the destination country produces vaccine itself but does not export it, and if the vaccination rate there is above that in the EU – both of these apply to Great Britain. However, countries like Germany warn of export bans, as this could lead to retaliatory actions in the international supply chains for precursors for vaccines.

Redistribution of vaccination doses in the EU

In mid-March Austria and five other EU countries had one “Correction mechanism” demanded because they see themselves at a disadvantage when it comes to administering vaccines. In addition to Austria, the Czech Republic, Slovenia, Bulgaria, Croatia and Latvia also complained. EU Commission President Ursula von der Leyen then suggested using ten million doses of the vaccine from Biontech / Pfizer, which will now be delivered early in the second quarter, for compensation.

So far, however, no agreement has been reached by the member states. Germany suggested using only three of the ten million cans in order to better position the five countries except Austria. In EU circles it is said to justify that Vienna is not in that bad position compared to the other countries when it comes to allocation. But Kurz sees himself ripped off and now wants to turn the question into a summit topic.

So far, the EU has ordered 2.6 billion vaccine doses from six manufacturers. Germany is now demanding that the Russian vaccine Sputnik V be ordered through the EU. Berlin called on the EU Commission on Wednesday to start talks on this “promptly”. The background to this is the recent comment by EU Commissioner Thierry Breton, who comes from France, that the Sputnik vaccine is not needed.

Sputnik V is not yet approved in the EU. However, the EU Medicines Agency (EMA) has started a so-called rolling procedure for approval. Berlin points out, however, that contracts for the other vaccines were also concluded prior to approval.

On the basis of national procedures, at least Hungary, Slovakia, the Czech Republic and Italy are already using the Russian vaccine or want to use it. Austria also had several contacts with Russia regarding a possible delivery of the Russian corona vaccine and possible production in Austria. Federal Chancellor Kurz always emphasized that EU approval was required for deliveries to Austria.

Greece, Austria and other countries that are heavily dependent on tourism want to save the summer season with a vaccination pass based on the Israeli model. Other EU countries such as Belgium, France or Germany are skeptical about a vaccination certificate as a prerequisite for traveling, because so far only a few people in Europe have been vaccinated and this could result in privileges for vaccinated people.

The commission tried the balancing act last week and made a proposal for a “digital green vaccination certificate”. It should make traveling easier without restricting the freedom of movement of people who have not been vaccinated – and also contain test results and information about surviving corona disease. For travelers, testing or quarantine requirements could be dispensed with. The dispute over the rights associated with the ID is still smoldering. The digital document should not be ready until June.

Agreement was reached on Turkey. Thus the conclusions on Turkey were adopted. The spokesman for Council President Charles Michel announced this on Twitter on Thursday evening. It promises Turkey concrete rewards for further de-escalating the gas dispute in the eastern Mediterranean, such as an expansion of the customs union and visa exemption for Turks in the EU. However, a decision on this will not be made until the next EU summit in June. The summit declaration also addresses the human rights situation in Turkey, which remains a “central concern” of the EU.

In the evening, American President Joe Biden was added to the video conference, and US Secretary of State Anthony Blinken is currently in Brussels – further signs of the easing of the tension between the continents under Donald Trump.