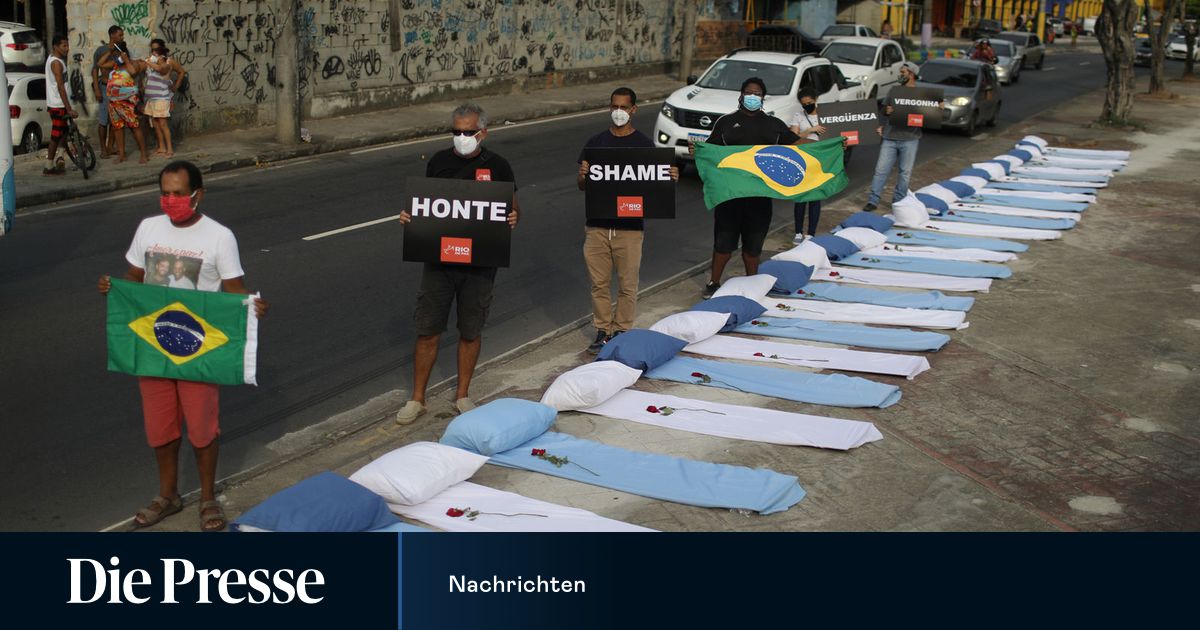 3000 deaths in one day, a total of 300,000 counted infections. The virus mutant P.1 is causing the health system to collapse in some regions of Brazil. And the rapid spread of the virus is fueling concerns about new variations.

Brazil is also experiencing a sad Corona everyday life these days. In front of the Ronaldo Gazzola Hospital in northern Rio de Janeiro, there are about 30 mats with sheets, pillows and roses. The mats are intended to symbolize hospital beds in which Covid 19 patients are treated. The flowers are used to remember people who died of Corona. Lots of people come by to put down a rose.

But it’s not just about commemoration. Antonio Carlos Casto, head of the non-governmental organization Rio de Paz, says: “We are here to demand the fundamentals: a crisis cabinet, a joint effort by the President of the Republic, the governors and the mayors.”

The country with 210 million inhabitants is one of the states that have been particularly hard hit by the pandemic: Each of the mats also stands for 10,000 deaths. Brazil became the second country in the world to pass the 300,000 registered corona fatality mark on Wednesday. Only in the United States, with 545,000 deaths, has the virus fallen victim to the virus in absolute terms.

And there was another sad number to report this week: For the first time, more than 3000 people died within a single day. Scientists reckon that the average will soon be up to 3500 deaths per day. More than 12.2 million people have been shown to be infected.

Experts attribute the development, among other things, to a variant of the coronavirus that was detected in travelers from the Amazon region in January. “This new variant seems to have a greater rate of infection. The cases seem to develop more quickly,” says epidemiologist Diego Xavier, who works at the “Fundação Oswaldo Cruz” (Fiocruz) research facility.

The variant has now also been detected in many other countries. It doesn’t have to be more deadly. According to a study, the vaccines from Biontech / Pfizer and AstraZeneca work better against them than initially thought. But because of the high number of people infected, the hospitals are full. In some places, patients can hardly be cared for. Brazil’s health system is about to collapse – or has already collapsed in many places.

Not only is the remote Amazon metropolis affected, but also the south and southeast: São Paulo, Brazil’s richest city, and the state of Rio Grande do Sulvon, which was shaped by German immigrants. The situation in intensive care units is in “critical condition” in 24 out of 26 states and in the capital district of Brasília. Hundreds are waiting for a bed or dying in line. There is a lack of medication and oxygen.

Younger people are particularly affected. “People go out thinking they are just losing their senses of taste and smell,” says São Paulo State Health Secretary Jean Gorinchteyn. “And in the end they lose their lives.”

According to Fiocruz, the increasing spread of Sars-CoV-2 has favored “worrying variants” such as the new P.1 variant. “The big problem is that this variant occurred in Brazil because the pandemic was already out of control,” says Xavier. “This happens – as in Great Britain or South Africa – where there are many cases and a high level of contagion.”

Brazilian President Jair Bolsonaro played down the corona virus from the start. Xavier says: “If the president continues like this and the contagion continues, there may be a new variant that does not respond to a vaccine.” After the popular left ex-head of state Luiz Inácio Lula da Silva returned to the political stage, the right-wing populist has softened his tone a little – also with a view to vaccinations.

In the meantime he has announced the establishment of a crisis committee. Bolsonaro also points out efforts to acquire vaccines. 500 million vaccine doses by the end of the year are “guaranteed”. “2021 will be the year of vaccination for Brazilians,” promised the president. Many don’t believe him. As a sign of protest, they are now beating pots and pans. “Murderer” shouts were also loud.

Brazil had repeatedly postponed the start of vaccination and corrected the amount of vaccination doses. This is all the more tragic because the country actually has the potential for a successful vaccination campaign – a comprehensive and free public health system that vaccinated 80 million people against the influenza virus in three months in 2019.

After all, a factory in the north of Rio has now started large-scale production of the AstraZeneca vaccine based on imported pharmaceuticals. Bolsonaro continues to oppose a lockdown for economic reasons. But mayors and governors of major cities and states have combined a lockdown with a “super holiday” for ten days from Friday. Violations can result in penalties including imprisonment.