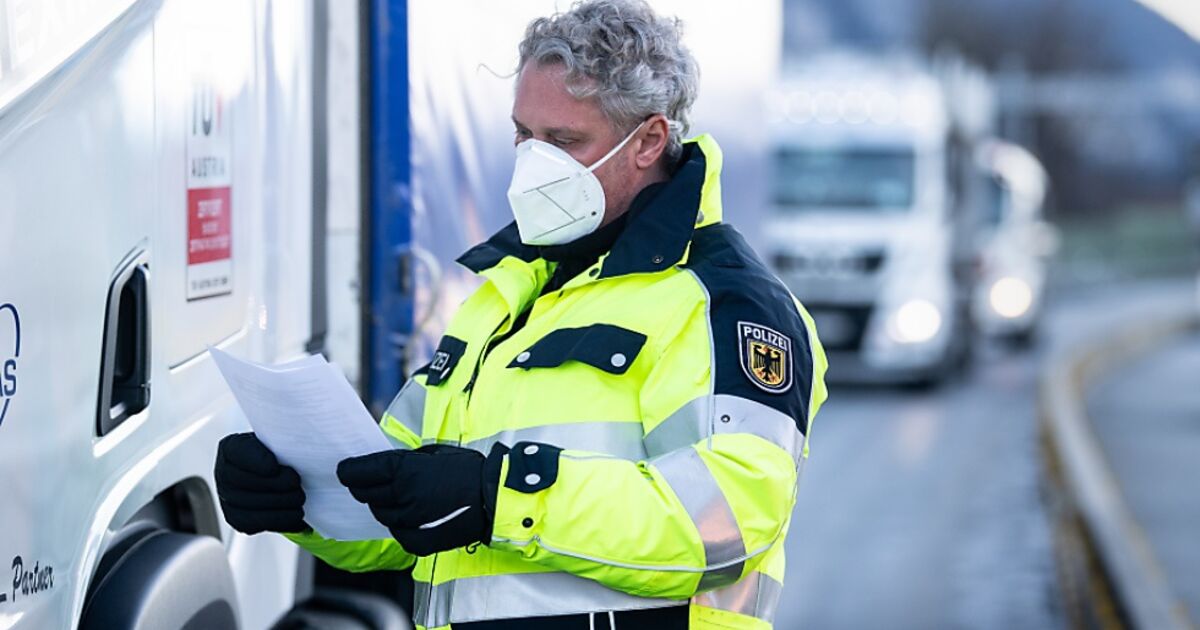 The dispute between Germany and the EU Commission over the stricter entry rules is coming to a head. While the Brussels authority is calling for changes in a letter of complaint, Germany wants to extend border controls at the crossings to Tyrol and the Czech Republic until March 3. At the same time, criticism from Brussels was decisively rejected in both Berlin and Munich.

Germany declared the Czech Republic, Slovakia and large parts of Tyrol to be so-called virus variant areas in mid-February. From there, only Germans and foreigners with a residence and residence permit in Germany are currently allowed to enter. There are exceptions, among others, for truck drivers and cross-border commuters with systemically relevant professions. You have to present a negative corona test that is no older than 48 hours. The rules were initially introduced for ten days.

However, due to various solo efforts, the EU Commission sees freedom of movement and thus the flow of goods in the Schengen area at risk. That is why she sent letters of complaint to Germany, Belgium, Denmark, Sweden, Finland and Hungary on Monday. Several requirements are disproportionate or unfounded, according to the letter to the German EU ambassador in Brussels, Michael Clauss, which is available to the German Press Agency. “We believe that Germany’s understandable goal – the protection of public health in a pandemic – could be achieved through less restrictive measures.”

The EU Commission now expects a response within ten working days. In theory, it could initiate legal proceedings against Germany, but this is unlikely due to the ongoing pandemic.

In the past few days, the EU Commission had repeatedly expressed criticism of the German measures, which the German Interior Minister Horst Seehofer (CSU) always brusquely rejected. The basis of the concerns from Brussels is that the EU states agreed on common recommendations for traveling within the EU a few weeks ago. These are based on a map of Europe, on which regions are marked in color using common criteria. In the opinion of the EU Commission, everyone should adhere to this. The European ministers of the EU countries also wanted to discuss the travel rules on Tuesday.

EU State Minister Michael Roth rejected the EU Commission’s criticism on Tuesday. What has been done is in accordance with the Schengen Agreement, said the SPD politician. The decision was very difficult for the federal government. “But we have an obligation to deal with a virus mutation in such a way that the protection of our citizens has top priority.” In the Schengen area, to which 26 European countries belong, there are actually no stationary border controls. Exceptions are possible in particularly dangerous situations.

Seehofer said on Tuesday: “We haven’t closed a single border crossing.” This is different from the last round of corona-related checks. The Czechs, Austrians, Slovaks and Italians had set up test stations for their part to prevent major backlogs, “so that this is a nice European interaction”.

The German interior minister emphasized that it was only about mutation areas. “Maybe we’ll be happy that we did that.” One could not impose great restrictions on the people in Germany and then let “mutated viruses” into the country unchecked. With a view to the tense corona situation in the French department of Moselle, a task force is advising that, according to Seehofer, it should report to the cabinet on Wednesday.

In its four-page letter, the EU Commission lists in detail which German measures it considers to be inappropriate. In doing so, she also questions the classification of the Czech Republic and Slovakia as virus variant areas: According to the EU health authority ECDC, only a few cases of the British virus variant have been discovered in both countries.

The EU Commission is also dissatisfied with the exceptions. Among other things, there is no exception for families living across borders. The authority also criticizes the requirements for truck drivers. They would also have to present a corona test that is no more than 48 hours old if they only crossed the variant areas. The recommendations of the EU states, however, provide that transport workers generally do not have to take a test – and if they do, it should be a quick test. The 48-hour rule also makes it possible to be tested in Poland, Italy or Slovenia, drive through a virus variant area and then enter Germany.

EU Commission deputy Margaritis Schinas downplayed the conflict on Tuesday. “We see movement in the German government to come to a consensus,” he told the dpa. “I am sure that some kind of mutual understanding will emerge.”