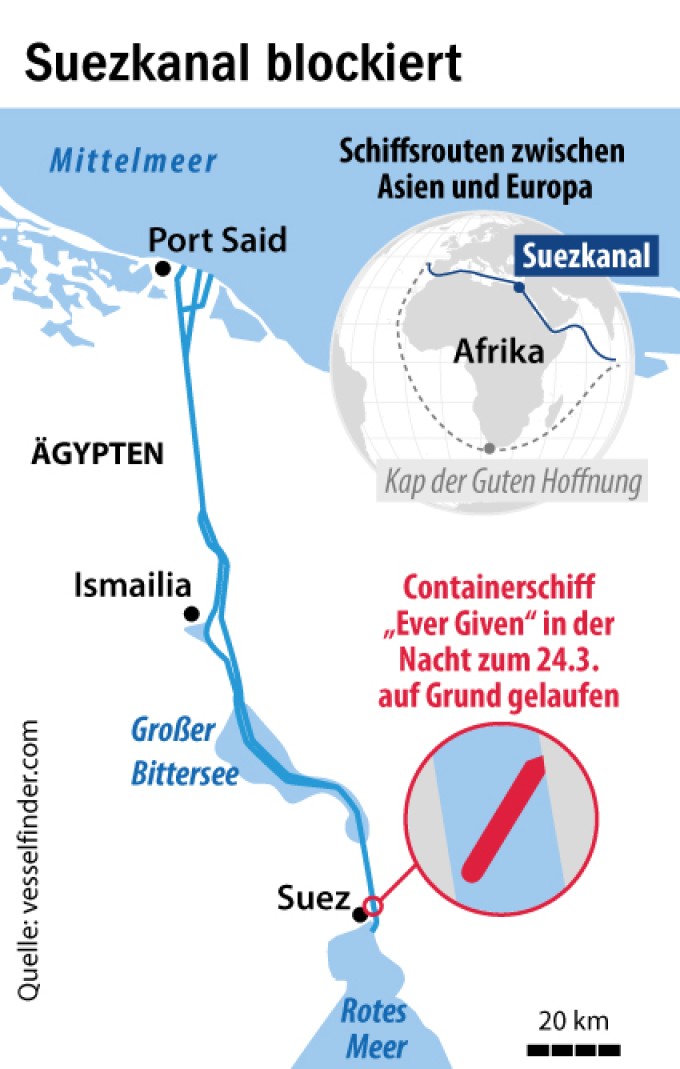 Dhe blockade of the Suez Canal by a stuck container ship, according to a representative of the Egyptian government, will take a maximum of three days, contrary to other estimates. Shipping on the canal between the Red Sea and the Mediterranean will be “resumed within 48 to 72 hours at most,” said the advisor to Egypt’s head of state Abdel Fattah al Sisi for seaports, Mohab Mamisch, on Thursday evening to the AFP news agency.

As the former head of the Suez Canal Authority, Mamisch explained that he had already seen several rescue operations. “I know every inch of the canal.”

The 400 meter long and 59 meter wide “MV Ever Given” ran aground in the Suez Canal on Wednesday. Since then, the giant container ship in a diagonal position has completely blocked the canal, with several hundred ships stowed on both sides of the canal.

The owner speaks of an “extremely difficult” maneuver

The owner, the Japanese leasing company Shoei Kisen Kaisha, had announced before Mamisch’s statements that it was “extremely difficult” to get the “Ever Given” back on track. The canal administration dispatched several tugs, and a team from the Dutch specialist company Smit Salvage also set off. The boss of the parent company Boskalis, Peter Berdowski, told the Dutch broadcaster Nieuwsuur that getting the container ship moving again could “take days or weeks”.

The Suez Canal, opened in 1869, shortens trade links between Asia and Europe. The distance from Singapore to Rotterdam is reduced by 6,000 kilometers through the canal compared to the trip around the Cape of Good Hope on the southern tip of Africa.

The blockade of the Suez Canal temporarily caused the oil price to rise. According to the Federation of German Industries, international logistics turbulence can already be felt. Central supply chains are in danger of stalling due to a lack of containers, unpunctual ships and lack of transport capacity. The shipping company giants Maersk and Hapag-Lloyd announced that they are now examining the detour of their ships around the Cape of Good Hope.

Egypt achieved proceeds of the equivalent of 4.2 billion euros from the passage rights through the Suez Canal last year. In 2020, almost 19,000 ships passed the waterway.