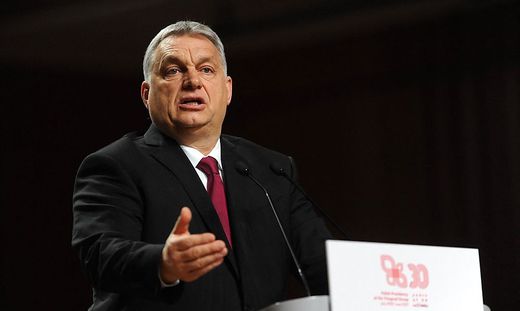 Decision in a year-long dispute: The EPP Group paved the way for a suspension of the Hungarian ruling party. This anticipated a possible exclusion and withdrew its MPs.

The right-wing Hungarian Fidesz of Viktor Orban left the Christian Democratic EPP Group in the European Parliament on Wednesday. Orbán communicated this step in a letter to the European People’s Party (EPP). “I hereby inform you that the Fidesz MEPs are terminating their membership in the EPP Group”says Orban. According to a Twitter post, he announced his departure in a letter to EPP parliamentary group leader Manfred Weber.

Before that, there had already been an open conflict between the Fidesz party and the EPP. Notwithstanding Orban’s threats, the Christian Democratic EPP Group in the European Parliament adopted new rules of procedure on Wednesday. This will make it possible in future to exclude or suspend entire delegations of member parties from the EPP Group. The reform was decided by 148 votes in favor to 28 against, it said. Obviously, Orban wanted to pre-empt the EPP decision with the letter.

We will not let our MEPs be silenced or limited in their capacity to represent our voters. Tackling the pandemic and saving lives remains our number one priority. Therefore, following the adoption of new rules in the @EPPGroup, #Fidesz has decided to leave the Group. pic.twitter.com/WSx1PmtKQ8

Orban had threatened the faction that wants to suspend the Fidesz MPs. Orban had announced that if the group’s new rules of procedure were to be voted on and adopted, which would make it possible to suspend or exclude entire groups, the Fidesz MPs would leave the European People’s Party.

The conflict has come to a head as a result of verbal attacks by Fidesz politicians against top EU politicians and the dispute over the rule of law in the EU – a so-called rule of law procedure under Article 7 of the EU Treaty has been running against Hungary since 2018. Fidesz’s membership in the EPP has been on hold since 2019.

We in the @EPPGroup do not allow ourselves to be dictated what we vote on. Orban’s approach is one of a series of disturbing statements by FIDESZ politicians.

The Vice President of the EU Parliament and ÖVP MEP Othmar Karas stressed on Wednesday that the vote was also “a rejection of Viktor Orban’s attempt at extortion”. “We in the @EPPGroup do not allow ourselves to be dictated what we vote on. Orban’s approach is one of a number of disturbing statements by FIDESZ politicians,” Karas emphasized on Twitter. Karas wanted to immediately submit a motion to suspend Fidesz.

The dispute last came to a head in December 2020: After the Fidesz delegation head in the EU Parliament, Tamas DeutschWhen statements by parliamentary group leader Weber (CSU) on the rule of law came close to the Gestapo and the AVH secret service in communist Hungary, he was suspended, but not excluded, by the EPP parliamentary group. At that time the EPP decided to change its statutes in order to be able to exclude entire delegations. This step has now been taken.

The European People’s Party, to which the CDU and CSU also belong, forms the largest group in the European Parliament with 187 members. This would not change even without the twelve Fidesz MPs.

The EPP has been wrestling with Fidesz for years. Membership in the EPP party family was put on hold as early as 2019 – among other things because of alleged violations of EU fundamental values and because of verbal attacks against the then head of the EU Commission Jean-Claude Juncker. The Fidesz MEPs still belong to the group.